Although Cindy’s early summer broken leg caused a postponement of the major aspects of the planned 30th wedding anniversary celebration in September, we have been able to salvage some truly fun times in the past few weeks nonetheless.

We departed Traverse City on September 2 aboard the Balia with our great friends Gary and Ann from Indianapolis. 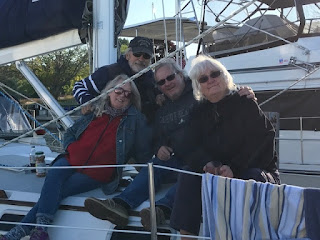 Leaving in late afternoon we accomplished a short sail to Suttons Bay for the night and dinner at newly renovated Village Inn (although our favorite dining place in the town is Martha’s followed by Boones, for this trip we opted for the closest acceptable restaurant easily accessed by game but gimpy crutch ladened Cindy). 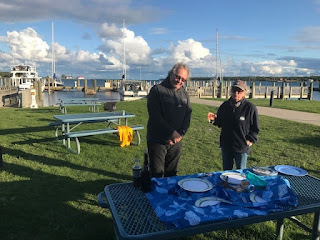 With a strong west wind the next day we made the trip to Beaver Island on one tack in a record 7 hours as we averaged 7 knots the whole way with 5 ft partially following seas. First night’s dinner was at the classic bar Shamrock, and then Gary and Ann made a terrific dockside dinner for our actual anniversary on the 5th.
Gary and Ann now share our love of quiet Beaver as Gary even took an early morning stroll down the middle of main street with no cars in sight the whole time. 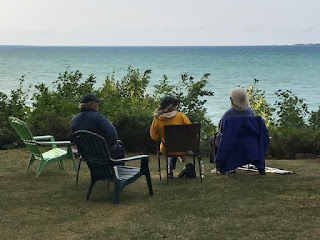 Before dinner we shared a bottle of wine sitting on the lawn at the Beaver Island Lodge, whose restaurant was closed but we were given permission to trespass, so we could also share one of the prettiest views in Northern Michigan from the bluff looking north to Garden, Squaw and Whiskey Islands. Cindy rented an adult tricycle, odd feeling to steer and then sit on the bike when you stop, and then biking master Gary whizzed all the way out to the lighthouse in record time looking like the wicked witch of the west pedaling in Dorothy’s tornado as he zoomed by. Jay of course had at least one ice cream cone a day. 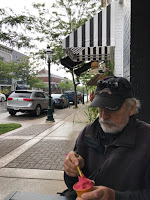 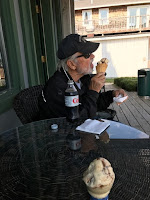 After 3 nights of quiet and breakfast at Dalwhinnie’s it was off to historic Petoskey for shopping and dining, the highlight of which was the Chandlery happy hour hors d’oeuvres on the patio. 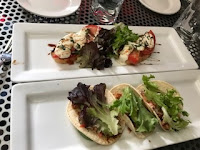 We finished the trip in Northport taking A & G to our favorite coffee and pastry place, Barb’s, then home for a final dinner together at the best restaurant in Traverse City, Amical.

We then spent 3 days in Traverse City partly enjoying our own town as tourists, but also to attend 2 meetings, do some toilet repairs (Jay still is apologizing, now publicly, to guests Gary and Ann for not rebuilding the head before they arrived) and for Cindy to have some additional physical therapy as the healing of the broken leg is proceeding much more slowly than expected.

After that we began the second portion of our trip solo with a first night in Elk Rapids, then two in Charlevoix, after which we will return home much more relaxed and ready to face the end of the summer/fall tourist season with enthusiasm.
Getting around the boat for Cindy has gotten much easier with a cane versus crutches to get to anything nearby. Jay’s so happy not to be cleaning bathrooms and doing dishes as well as cooking, as he had to pick up all of the slack for the summer with Cindy being mostly in a wheelchair.
Posted by gtgourmetcruisescaptain at 3:48 PM No comments: