Our day in Charleston was all that we desired and more, with 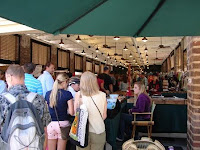 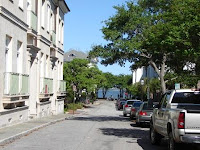 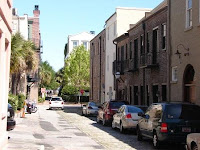 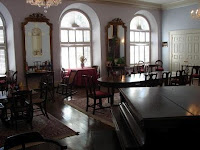 and one of the better historical museum at the Exchange/Provost Prison. While Savannah has more parks scattered throughout its historic district, Charleston's waterfront park is something to behold with cruise ships on one side and statues and water play areas on the other. And of course Jay purchased 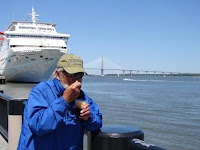 his traditional Italian ice that was wonderfully flavorful, and Cindy had a second round of shrimp and 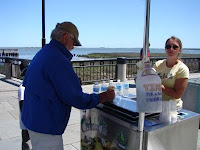 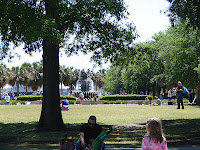 grits with this one at the Fleet Landing restaurant done in the traditional tasso ham gravy base and stoneground but creamy grits. We then traveled on Easter Sunday, after seeing some pretty unique cross dresses in Charleston's parks, 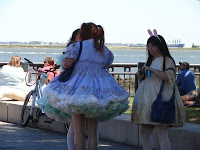 to our final destination of Isle of Palms sailing across Charleston Harbor first past Ft. Sumter 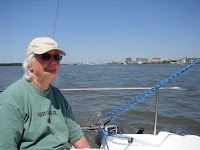 . There , as is our tradition on these annual April travels, we watched the final round of the Masters Golf Tournament with a sensational, exciting playoff win by Bubba Watson. This morning we will haul out the boat and begin our journey home with planned visits to Knoxville to see Priscilla and Scott McKenney, and our Indianapolis Bazbeau Pizza group - Kitty and Bob, Ann and Gary and the Joe and Carol.
Posted by gtgourmetcruisescaptain at 5:31 AM No comments:

Anchoring out and hard landings 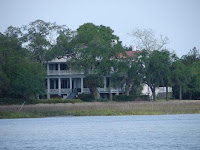 from the water and headed north motorsailing through the Coosaw Asheboro Cut to Tom's Creek for an overnight anchor. After weathering a 30 minute thunderstorm just after we finished setting up the canopy over the poptop, we enjoy 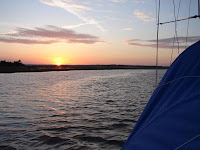 ed the peace and quiet of the marshes again spotting numerous porpoises, herons and pelicans. Waking to a beautiful dawn but concerned that our gas supply was a bit lower than planned (since winds on the Coosaw were not as helpful as we need to sail only), we diverted out the North Edisto River toward the Atlantic landing at Bohicket Marina on Seabrook Island. The "landing" was a bit bumpier 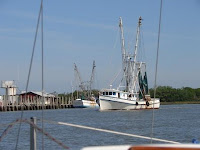 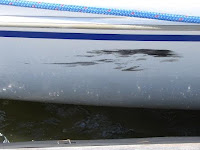 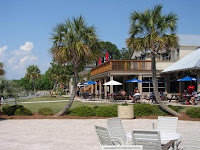 than planned due to a 6 mph current and some unexpected boat traffic that suddenly veered in front of us, causing us to hit a rubber dock fender a bit hard. First time ever for a crash landing with any of our boats so we decided to recouperate with lunch and watching the Masters golf on tv rather than continuing on. Really nice Marina and the bar Red's Ice House had super grouper sandwich , friendly bartender Aaron and guitar player Matt outstanding. We also stayed to wait out a second line of storms more powerful than the one before with lots of lighting for an hour. This morning, Friday, the front is still passing but with just clouds and cold. Tonight we plan to anchor a bit more north to get ready to hit the fast flowing Elliot cut south of Charleston on an early morning flood tide. We have decided that while interesting strategically the extreme tides of 9 ft in this area added to the flooding from the storms and a full moon are taking a bit of the fun out of the trip. Our time in Charleston has now cut down to one versus 3 days , then pull the boat and head home.
Posted by gtgourmetcruisescaptain at 10:23 AM No comments:

After a terrific broad reach sail from Hilton Head all the way across Port Royal sound to the Beaufort River, we spent a wonderful day exploring Beaufort (that's Bufort to fellow northern folk) with it's amazing preserved architectural wonders shown below. The foodie highlights of the day were having shrimp cheese 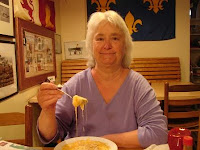 grits for breakfast and homemade key lime pie for lunch. At breakfast we met local celebrity actress Ione who was in the Big Chill . 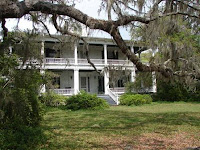 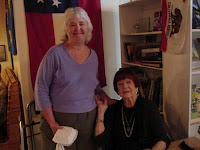 We enjoyed a carriage tour through the historic district (read the entire town) then walked some on our own see the estate Tidalhom where the Big Chill was filmed. Thenafter a quick lunch/dessert of key lime pie and sweet tea, 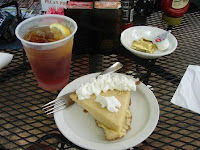 Jay returned to the boat while Cindy joined in a game of bocce ball with some locals, and back to the boat to prepare for our departure tomorrow. We met some fellow sailors from Quebec (Jean-Marie, Linda and their daughter aboard the Domaine de Florence who also have a french language blog going. 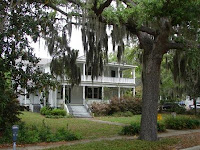 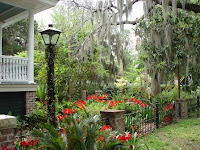 Posted by gtgourmetcruisescaptain at 6:35 AM No comments:

Setting out from Thunderbolt Marina - which is an amazing place primarily due to the deck area chairs and friendliness of Harbormasters Garner and Hal, and Glen who was the deliverer of the complimentary Krispy Kreme donuts and newspaper to our slip. Then our first day on the water , which was Saturday March 31, brought a terrific downwind sail that was dampened toward the end of the day by thunderstorms just after we crossed the commercially busy Savannah River. We anchored for awhile to avoid most of it but still arrived a bit drenched in our foul weather gear to beautiful Harbortown Marina at Sea Pines Plantation/Hilton Head. 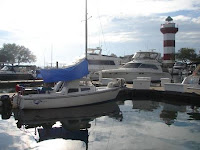 So we decided to spend a second night actually relaxing after 4 hectic days of logistics launching and positioning the Balia's trailor at Isle of Palms, our final destination. We took a look at the famous 18th hole at the golf course where the Heritage tournament will take place the week after this, then had one of the best hamburgers ever at the Harbortown Grill looking out over the 9th hole and practice ranges. Thought about playing a round but no teetimes were available so that saved us $500 we can put toward the rest of the trip. Last night we listened to live music while watching the final four on the patio at the Quarterdeck restaurant .
Posted by gtgourmetcruisescaptain at 4:08 PM No comments:

Our stop in Asheville allowed a stay at the Princess Anne B &B, 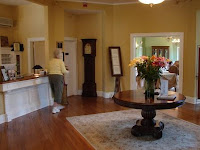 truly one of the best inn stays we have ever experienced - ample 2 room suite, amazingly great southern hospitality by all the employees but especially Howard and John helping us spot the boat safely on the charming neighborhood hills. Then it was on to quaint East Flat Rock for an all too short visit with relatives Nick and Mary Carol Weedman. 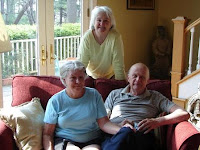 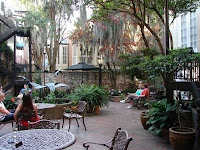 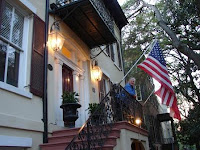 eating grits, second helping after devouring a cheesy version last night at Hueys' last night on the Savannah River Waterfront along with a very good gumbo file. The Music festival is in town so after a logistical day of boat launching we hope to attend a free in the park Charlie Daniels concert tonight.
Posted by gtgourmetcruisescaptain at 5:15 AM No comments:

This coming Tuesday, March 27th we leave the inn in the capable hands of Kathy our innsitter and again will head to the east coast to cruise a portion of the intracoastal waterway on our 22 ft Catalina for a week. The plan at this point is to visit friends in Indianapolis, then stop in Asheville NC finally ending up in Savannah to launch. We'll head north through Hilton Head to Charleston and Isle of Palms. Usually we've cruised North to South but this year we thought we'd try to reverse direction to take better advantage of prevailing winds to sail more. The historically warm weather in Northern Michigan had us questioning why leave 80 degree weather for the same but we truly enjoy our experience down south each year so off we go.
Posted by gtgourmetcruisescaptain at 12:11 PM No comments: