A Naval Battle of our own


After 7 days we are beginning to finally recover sufficiently from the incident that occurred last Sunday during a beautiful sail on Chesapeake Bay to be able to recount the story without further emotional consternation, well almost! On the morning of our departure from Norfolk a most ominous fog bank rolled in that had the appearance of a dust storm thousands of feet high, perhaps a portend of things to come but once that cleared we enjoyed a two hour motorsail up the River to Hampton Roads then out onto the Chesapeake sailing north between Cape Charles and Cape Henry with a destination of Yorktown. With 12 knots on an east wind beam reach doing about 7 knots we suddenly heard a “thunk” but saw nothing in front or behind. About 10 minutes later we recognized that our bilge was filled with water and Cindy went on communications detail calling in the MayDay to the Coast Guard while Jay investigated the source of the leak. The short version is that our propeller shaft was “gone” (later found to have slipped backward and jammed against the rudder) so Jay commenced stuffing the hole while Cindy coordinated assistance and packing the kitties into a single carrier with lifevests attached around it, and threw the valuables into a backpack in case we needed to abandon ship.

Within minutes 2 powerboats were on escort duty while we sailed on (no motor drive available and limited steerage) toward land, then the Coast Guard arrived in about 30 minutes to board us to assist in water control and to help take the sails down later under wind pressure. Under escort we sailed up the York River about an hour more until the towboat arrived to take us to Jordan marine (on Sarah's Creek in Gloucester so literally "up a creek without a paddle"), where the boat is once again up on the hard for repairs. The gist was that the set screws which hold the propeller shaft in place in the coupler had either managed to vibrate loose (the shaft being kept in place by the forward motion of the propeller shaft when we were motoring, but once under a strong sail set pulled backward by the resistance of the water on the prop) or were not properly installed in the first place. The jury and insurance coverage is still out on this one!

We have tried to make the best of our time while here this week and the owners of Jordan Marine have been great trying to get our boat repaired in less than 10 days (in 2 days the prop dent had been fixed and the shaft checked with a new more stable system in place for the set screws, and a new strut – holds the shaft for those who don’t know – ordered and shipped in) so we can still get north in time for the opening of the charter season on the Chesapeake and return home. 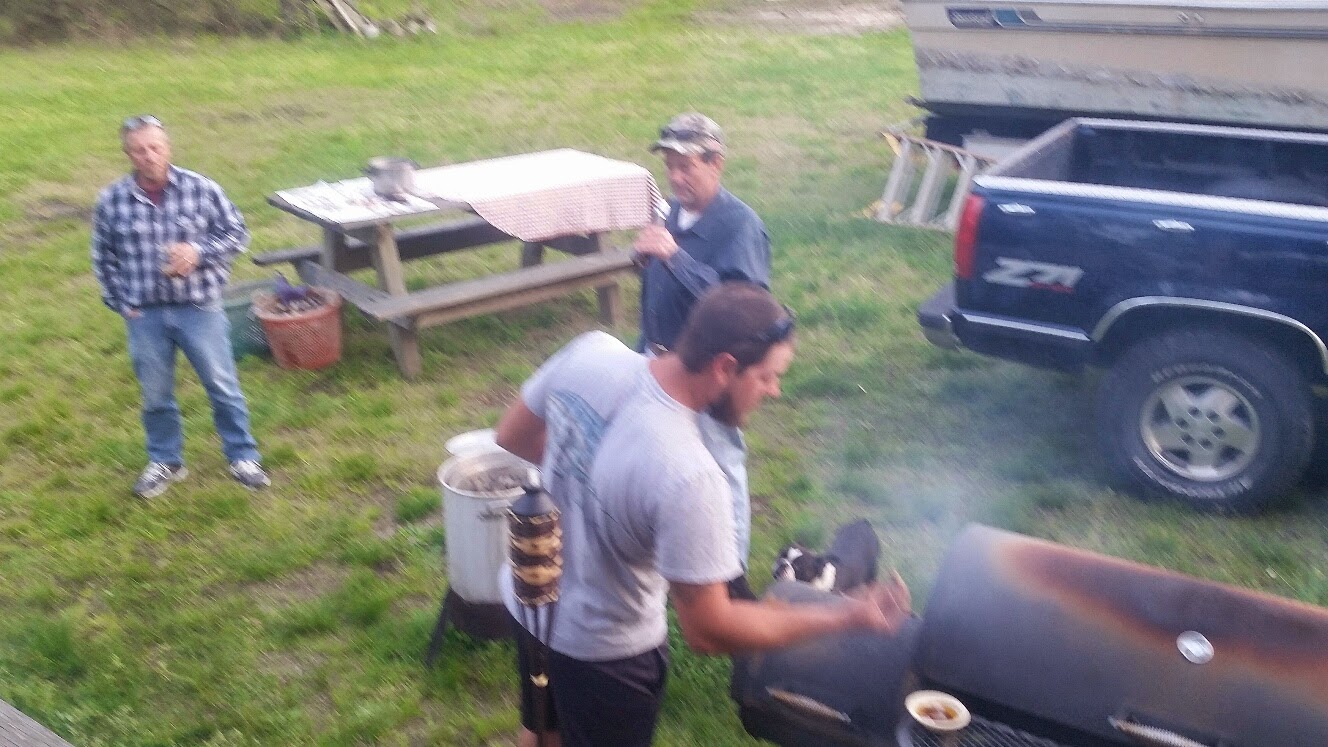 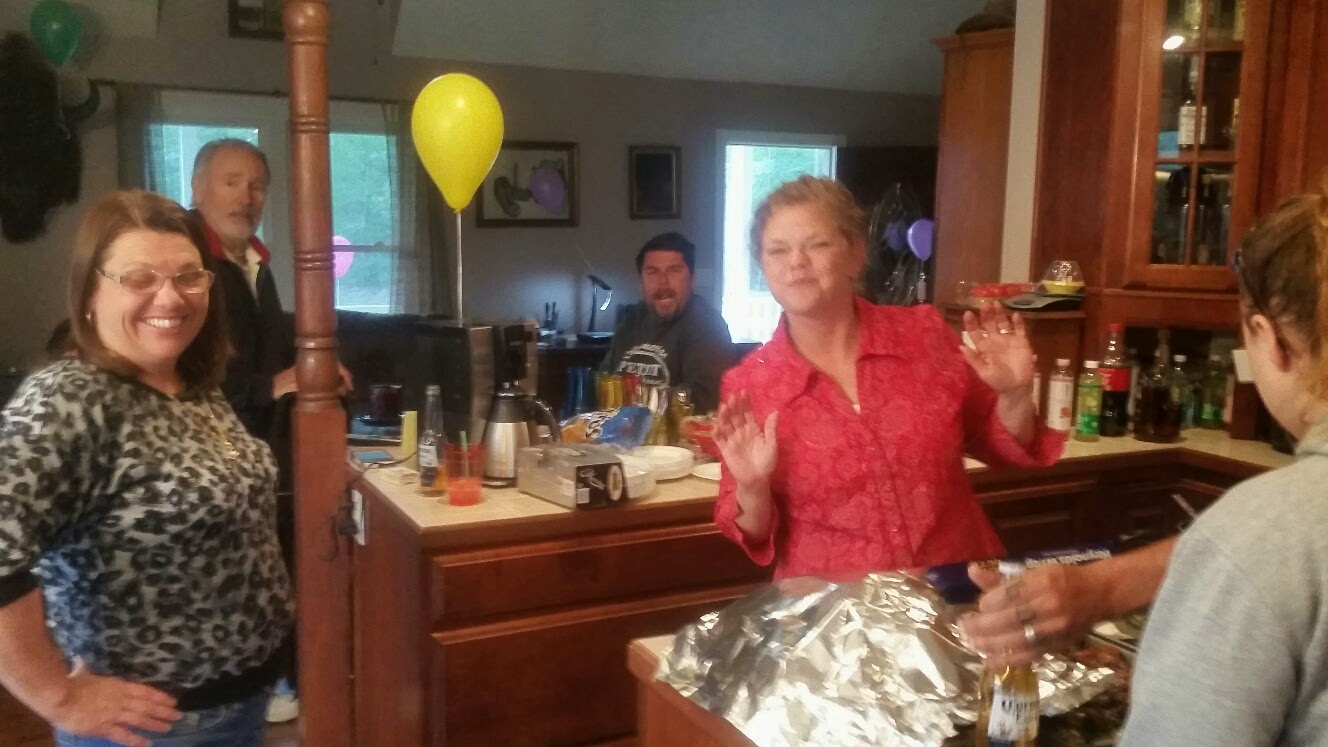 Owners Charles and Julie Duke also invited us to their home for a crab/oyster bake as they have a seafood business as a second business to the marine repairs, and it was amazing to taste blue crabs , clams, and oysters fresh within hours of their removal from the water. Well at least for Cindy as Jay does not care for crustaceans of any variety except shrimp and snails, but he did manage to swallow a quarter of an oyster Rockefeller.

During our time we have been cleaning the boat and relocating storage items up to Havre de Grace Maryland, things we were going to do once we arrived there but doing now to save time at the end of our travels that we now won’t have to spend. 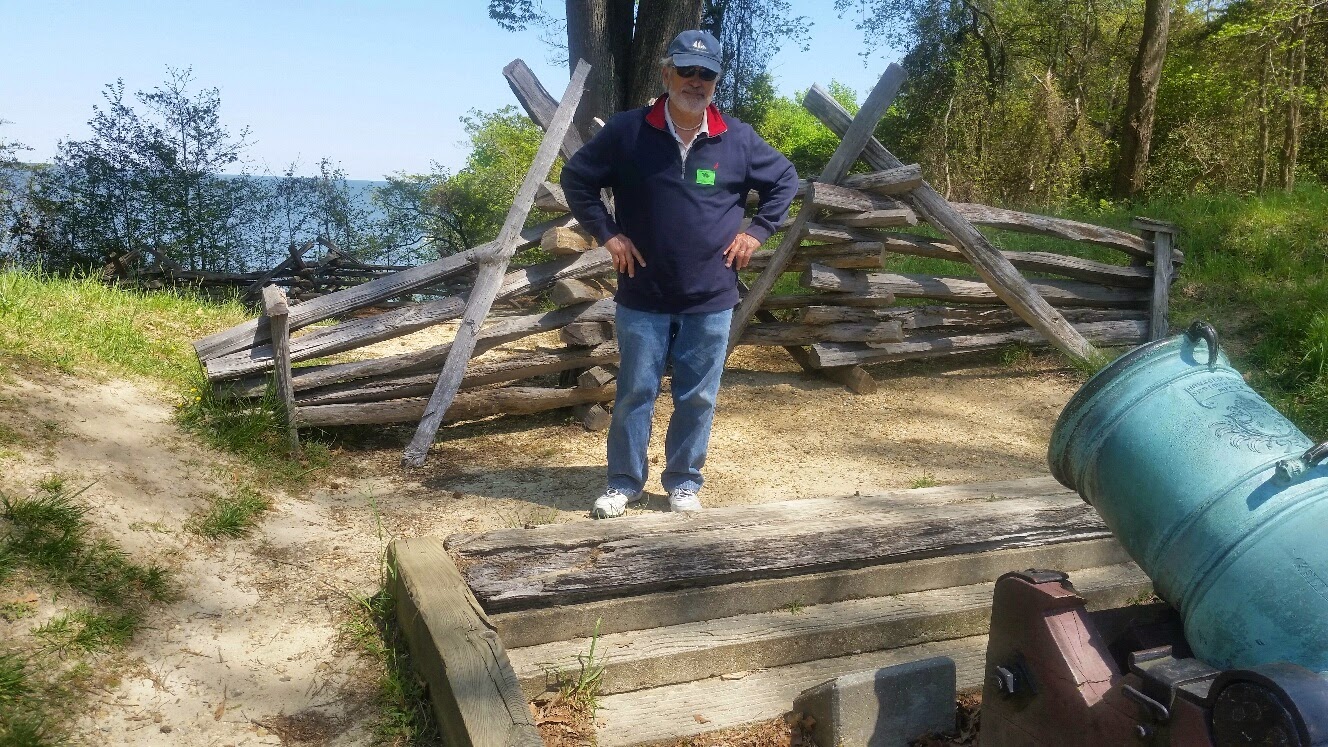 We also ventured to Yorktown Battlefield where we learned that at the beginning of this momentous battle that was the turning point of the Revolutionary war, there was a naval confrontation between Cornwallis’ English fleet and the newly allied French one just off the entrance to the Chesapeake from the Atlantic very close to where our own seafaring battle began (Jay stood next to a cannon with a view of the area in the background).

Walking the trenches and redoubts were awe inspiring, and Jay made a new friend of the owner of the local Ben and Jerry’s, Bob, who gave him a lifetime 10% discount pass on their ice cream – he’s in heaven. Most interesting artifact at Yorktown Battlefield visitor center was the Lafayette 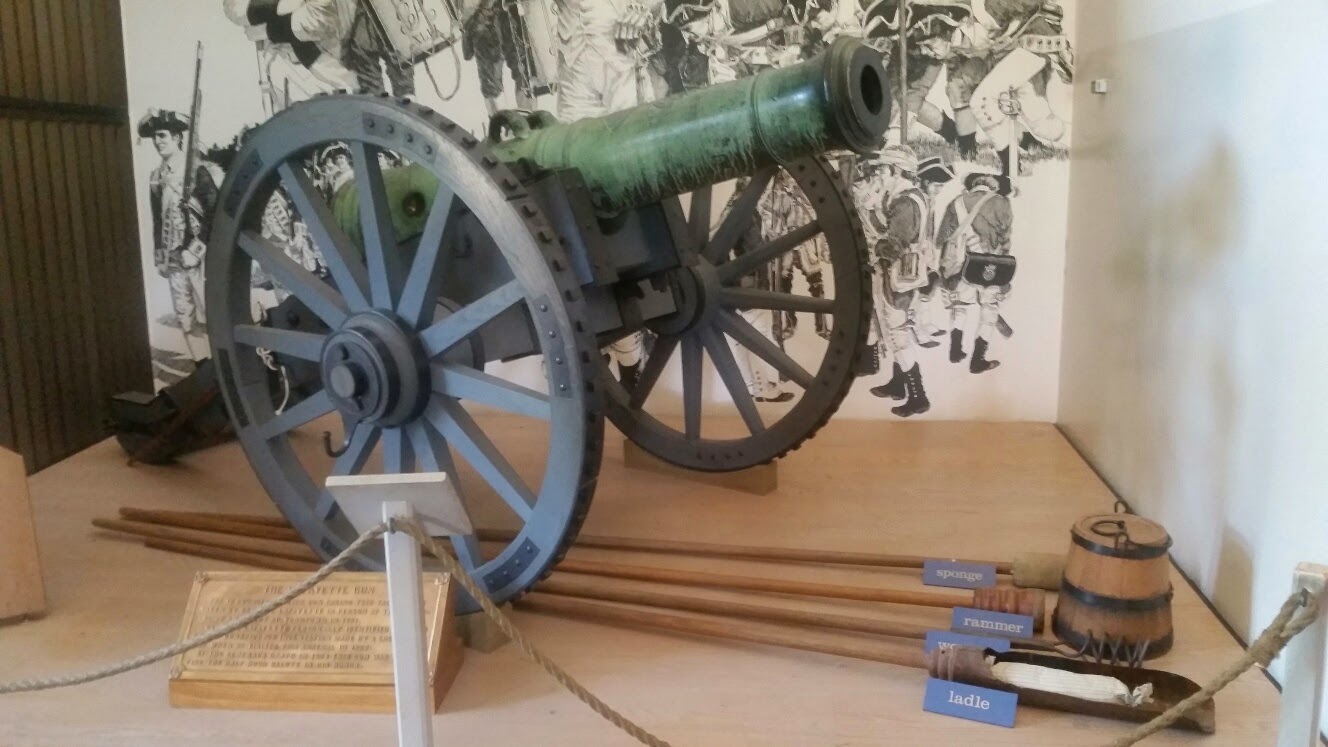 cannon with a dimple in it caused by a shell, which allowed Lafayette to apparently emotionally recognize it during a later visit. 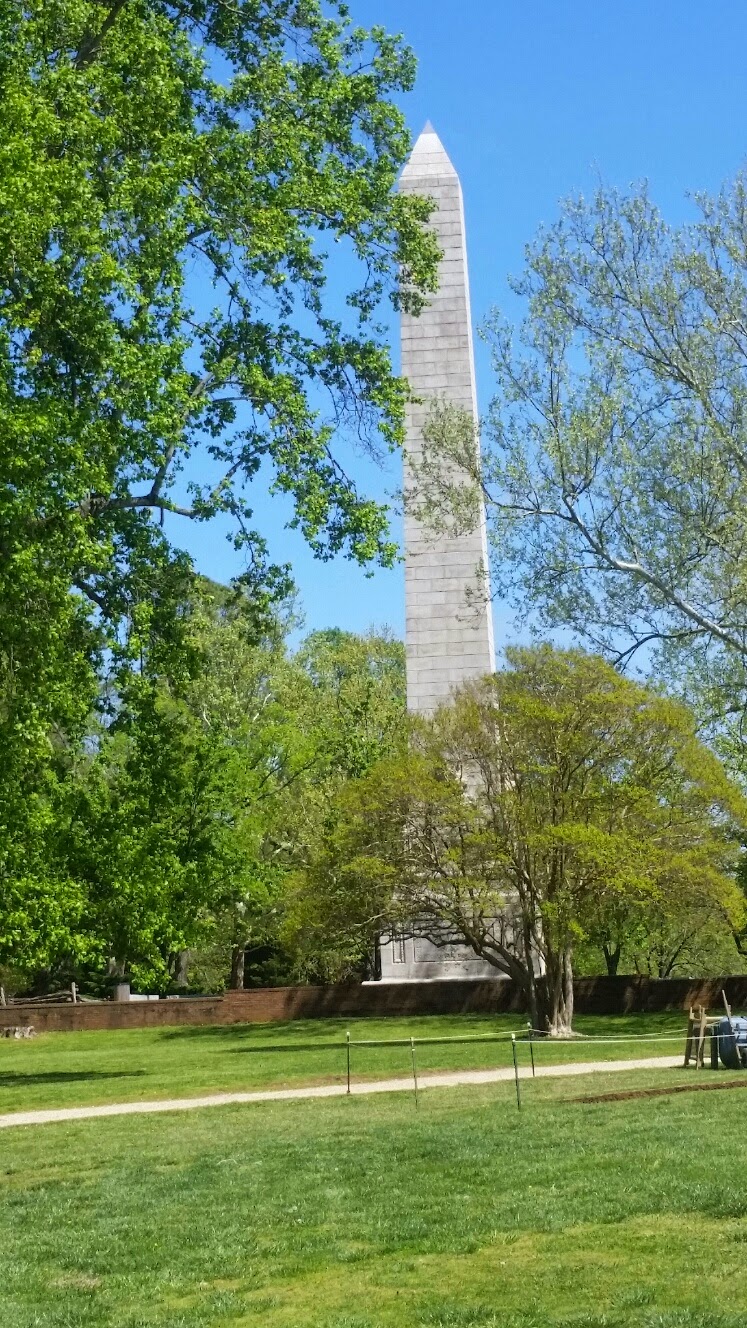 We skipped the more Disneyland like Historic Williamsburg, now at $41 per person for entry, for a trip to Jamestown. This first permanent English settlement took place in 1607 predating the arrival at Plymouth, and was the site of the Virginia Company’s council of government upon which our current governmental system later became based. 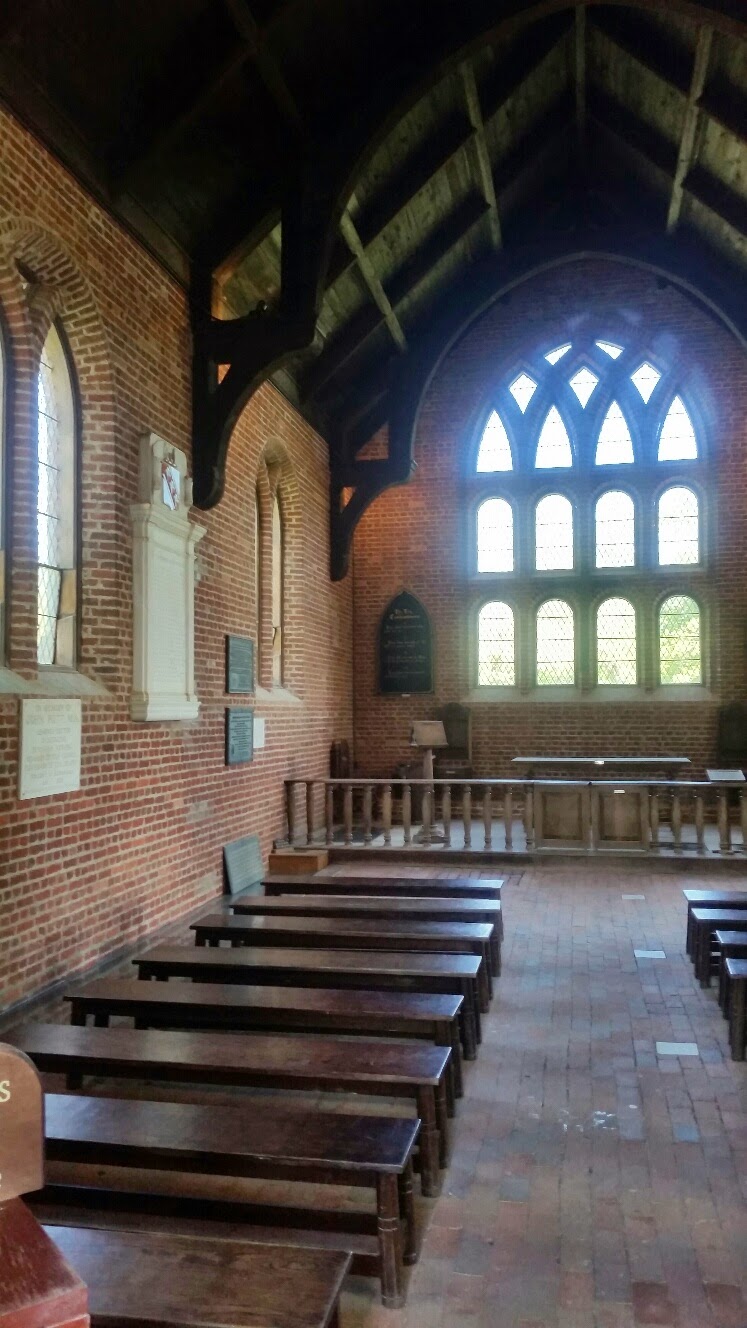 A truly amazing story of survival against horrendous odds including a multi- year drought that strained the at one time friendly relations with the Powhatan Indians, a situation that was made peaceful with the marriage of Pocahontas to planter John Rolfe. The marshes offered the makings for tar and the church was rebuilt over the initial foundations in 1907 to commemorate the 300 year anniversary of the landing, as was the obelisk. 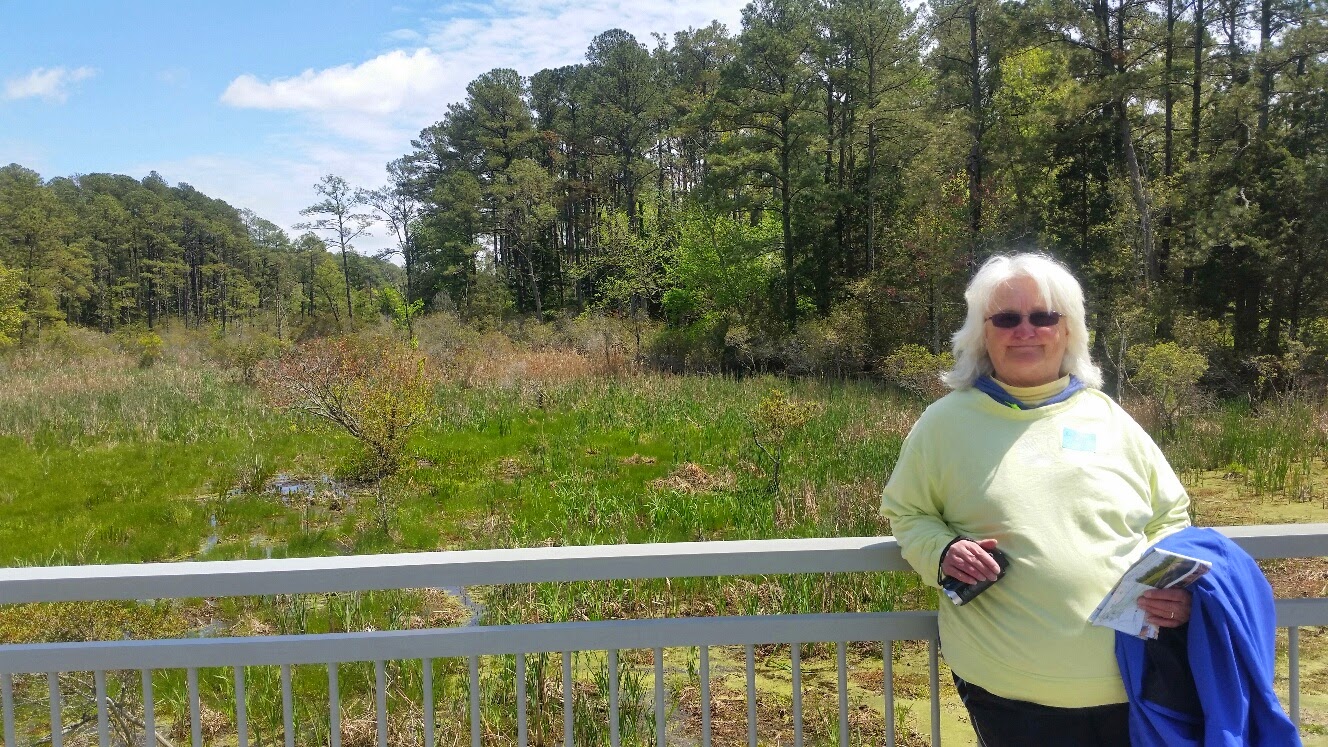 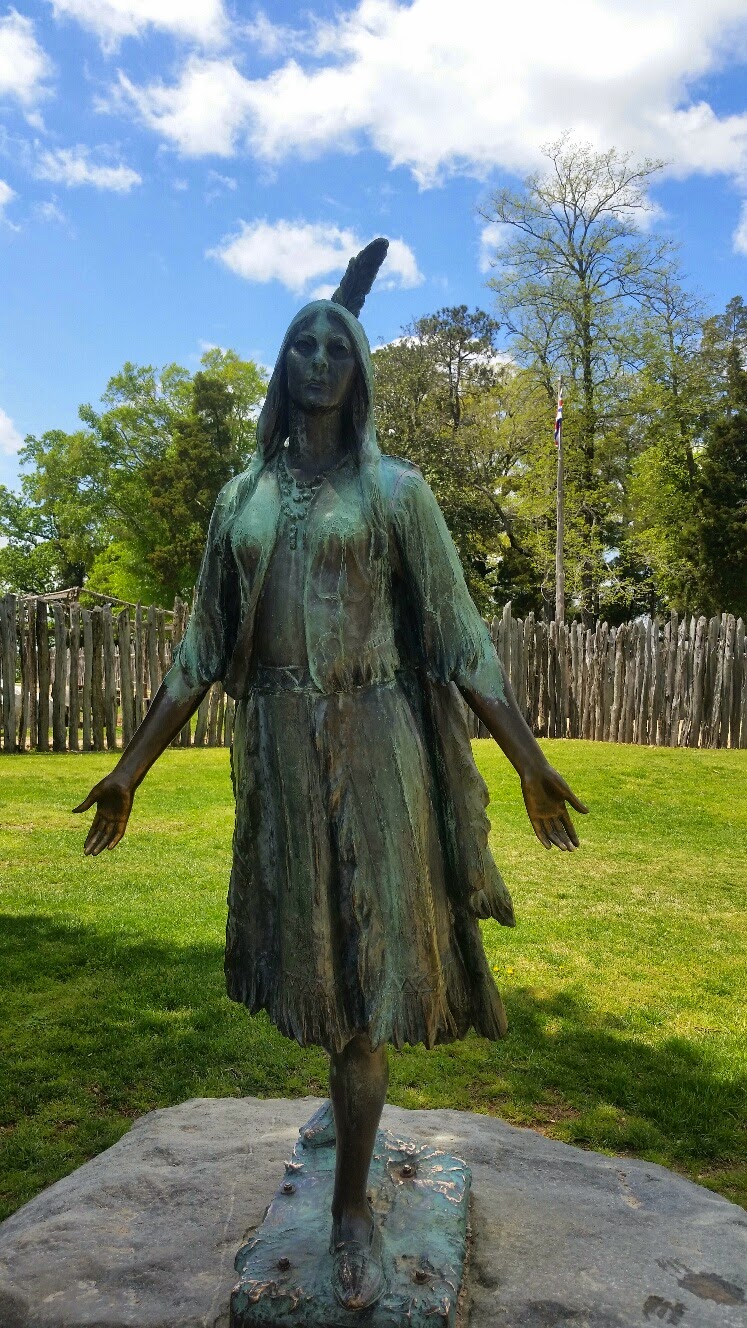 Our next and last entry will be a recap of the “best of”s. For now we are happy to be dry and safe. This has admittedly not been the trip of which we dreamed, but has provided other insights into our characters that may not have been possible otherwise. Perspective is Everything!
Posted by gtgourmetcruisescaptain at 7:12 AM